For almost 60 years the laser has been the technical standard for countless applications. The blue version is now revolutionizing industrial metal processing.

“The laser is a solution seeking a problem,” said Theodore H. Maiman, the man who developed the first functional laser in 1960. The problems were not long in coming. As a result, lasers are now some of the most important and versatile tools in industry, science and research. But there are still plenty of challenges for these “light amplifiers.”

Laser-welded joints are extremely stable and can withstand huge mechanical loads. Such strong welds are much in demand in the automotive and metalworking industries. Up to now, infrared lasers have been used to create the welds, but they cannot produce satisfactory results for all metals. There are problems with the most widely used metal in the world, namely copper.

Industrial processing of copper is essential if the “electric car for everyone” is to become a reality one day. This is because much more copper is needed for batteries and electric motors than for conventional cars. But anything that is a good electrical conductor also conducts heat well. In combination with the high reflectance of copper this makes it difficult to feed in enough energy to melt it in a controlled manner.

“Highly reflective metals such as copper and gold absorb the blue light spectrum seven to twenty times better than infrared radiation,” explains Dr. Harald König, an expert in laser technology at OSRAM in Regensburg. “The solution lies in using shorter wavelengths of light shifting into the blue range. Specifically, the wavelength of 450 nanometers is suitable for industrial processing of non-ferrous metals.”

That sounds quite easy. After all, blue semiconductor light has been around since the mid-90s. But initially there were no substrates for the semiconductor layers on which reliable blue lasers could be developed. “As a result, we had emitters with outputs and efficiencies far below the levels required for industrial applications,” says König. “Five years ago, there were only individual laser chips with outputs of only a few watts for applications in the blue spectral range. That was enough only for laser shows, and later for car headlights and projectors.” For a long time it was completely unthinkable for non-ferrous metal processing, which needs many times the power. 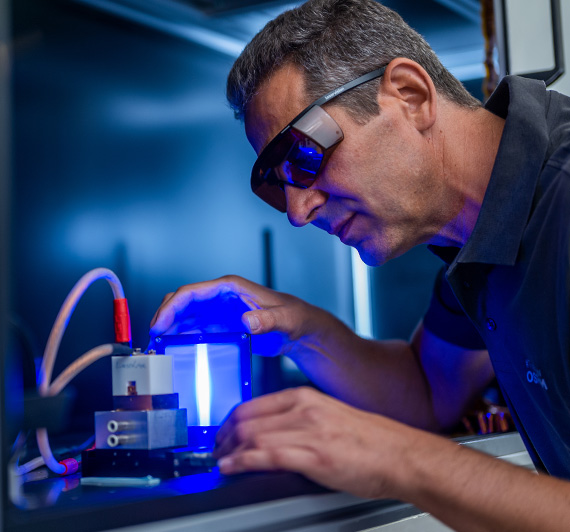 The output of the emitters had to be increased. König points to the setup used to test the blue lasers. “We concentrated on making the leap into the kilowatt class. Over the past few years we had steadily improved the efficiency and output of the individual emitters and achieved more than two watts and improved the efficiency by almost 40 percent. Simply optimizing single emitters was a not very promising way of getting into the top league.”

Then came the idea of concentrated blue laser power. König combined 23 single emitters in parallel in a one-centimeter laser bar. “At the start of the project hardly anyone believed that this would also work for blue lasers. After all, a single defective emitter – and there will always be those – can ruin the overall performance of the bar and even melt the semiconductor.”

The purpose of the project, which was supported by the Federal Ministry for Education and Research (BMBF), was to prove that powerful blue laser bars were possible. The key elements were the so-called epitaxy process, in which layers are grown on the semiconductor substrates, and the chip design. The gallium nitride layers had to grow atom by atom into high-quality, homogeneous layers on the wafers. Improvements were made to output, homogeneity and reliability in a series of meticulous experiments. At the same time, the chip design and the number of high-quality emitters were optimized.

After three years of intense work the breakthrough came in 2019. A record output for a bar of 107 watts and a best value of 46 percent conversion efficiency were demonstrated. And for the first time there was proof that the bar concept also worked for blue lasers. The leap into the kilowatt class was achieved. On the basis of this world’s first blue high-output laser bar, partner company Laserline launched the first diode laser with a laser power of 1,500 W in June 2019.

Cutting even under water

This diode laser can even melt, cut and weld pure copper with high precision. It produces accurate smooth welds that are precise enough for highly sensitive electronic components, thin copper foil and copper sheet or for welding thin sheet metal for smartphone batteries.

And it even works under water. This opens up new fields of application such as welding attachments at port facilities and on ships. Or repairs to offshore wind parks, bridges and locks.

But research continues. The market demands ever increasing output, efficiency and durability. And there are applications beyond material processing. Since blue light can be converted relatively easily into white light, blue laser diodes could be used in the future as high-output light sources to replace conventional lighting solutions. Ultra-brilliant, maintenance-free and extremely bright, they could be used for example for airfield lighting or sports stadium floodlighting. The blue laser – the solution seeking a problem – now has no shortage of possible applications.