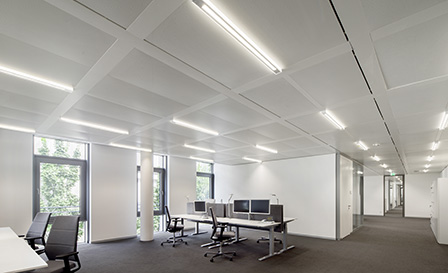 The new Siemens corporate headquarters in Munich, Germany has a forward-looking and variable spatial design and utilisation concept. This places high demands on the lighting, which must not only be energy-efficient but flexible as well. Osram supplied the lighting solutions, fulfilled the requirements of the globally active technology corporation and also demonstrated that light can be more than just lighting. The light in this case supports the successful architectural unison of heritage building sections with a highly modern new construction, and the well-being of approximately 1,200 employees at the site. The integration of various lighting scenarios in a light management system ensures utilisation of light according to needs and therefore high energy efficiency.

The headquarters of Siemens AG in the city centre of Munich saw a complete redesign in previous years. Siemens Real Estate connected the historic Palais Ludwig Ferdinand with a new, modern building characterised by a high level of transparency. An overground building space of around 45,000 square metres now accommodates an open and inspiring work environment for approximately 1,200 employees at the location. The freely accessible ground storey provides an open, inviting passageway for the public. The new headquarters complies with the most stringent sustainability standards in the world.

Maximum requirements were also placed on spatial concepts for the employees. The new office sections and equipment correspond to modern forms of work and organisation – as reflected by the openly designed office areas with think tanks, phone boxes and lounges as well as many communication zones throughout the building. "Light is an elemental component in creating an atmosphere for people to enable them to be creative and productive according to their individual needs," explained Eladia Pulido, Heads of Osram's Lighting Solutions business unit.

Premium-quality LED solutions were installed in almost all building areas, in some cases manufactured according to customer specifications. All luminaires are equipped with DALI drivers to enable maximum energy savings and are controlled and monitored via the central building system technology. The lighting itself can be switched and dimmed according to needs via daylight and occupancy sensors in the building – thus saving further energy.

Around 3,500 customer-specific units of the Arktika luminaire were set up throughout the offices as semi-recessed luminaires in various lengths. This luminaire, featuring high visual comfort matched to the needs of modern places of work, supports open and transparent spatial effects. Special hexagonal-shaped reflector technology achieves highly efficient light distribution with minimum glare, and the opal light emission surfaces on the sides provide an indirect light component for ceiling illumination.

Around 3,000 Lunis 2 LED downlights were installed in the meeting rooms of the historic Palais Ludwig Ferdinand as well as in all circulation areas, the sanitary rooms and other ancillary rooms of the office building. These downlights generate high lumen-output lighting and create a concise, transparent atmosphere with their purist design.

The downlights were supplemented with the Tecario LED light line system – almost 200 metres of this solution were installed in the circulation areas and larger meeting rooms. The special look of the system is ideally suited to the sophisticated architectural interior of the new building. The modular insert options of the Tecario LED provide high levels of flexibility and therefore the preconditions for setting eye-catching accents in the lighting design.

Individual visual accents are also set by the Linearlight Flex LED in the historic Palais Ludwig Ferdinand: these flexible LED modules were installed as an indirect light source in the peripheral coves around the central meeting rooms. The lighting concept is completed by 1,500 Monsun 2 damp-proof luminaires, reliably providing good visual conditions in the underground garage of the corporate headquarters. OSRAM, based in Munich, is a globally leading lighting manufacturer with a history dating back about 100 years. The product portfolio includes high-tech applications based on semiconductor technology such as infrared or laser lighting. The products are used in highly diverse applications ranging from virtual reality, autonomous driving or mobile phones to smart and connected lighting solutions in buildings and cities. In automotive lighting, the company is the global market and technology leader. Based on continuing operations (excluding Ledvance), OSRAM had around 24,600 employees worldwide at the end of fiscal 2016 (September 30) and generated revenue of almost €3.8 billion in that fiscal year. The company is listed on the stock exchanges in Frankfurt and Munich (ISIN: DE000LED4000; WKN: LED400; trading symbol: OSR). Additional information can be found at www.osram.com