Stimulation with light could revolutionize the quality of cochlear implants – and help people who are hard of hearing enjoy a better quality of life.

Can you hear light? Yes, you can. Because light can be used to stimulate specifically nerve cells in the cochlea. This is exactly what the research team led by Uli Schwarz, Professor of Experimental Sensors and Optoelectronics at Chemnitz University of Technology, is investigating. He wants to enable people who are profoundly hard of hearing or deaf to enjoy what most people take for granted. Namely more natural hearing, enjoying more musical pleasure and understanding speech better in group environments.

“To someone fitted with a conventional implant, a classical piano concerto will sound like the pianist is wearing mitts or is playing with his elbows,” says Tobias Moser, Professor of Auditory Neuroscience at the University of Göttingen. He aims to change this and open up all the intermediate tones.

Conventional cochlear implants are based on electrical stimulation. They convert sound into pulses of electrical current. Such implants enable around 700,000 people worldwide to have a rudimentary sense of hearing and to understand speech. However, they are unable to distinguish between different pitches. And if there is background noise they find it difficult to understand what other people are saying. Although the electrical stimuli are fed directly to the auditory nerves they are undifferentiated when they arrive.

Light instead of current

“Electrical stimulation has a poor pitch resolution. A large number of cells are stimulated at the same time – cells which are actually responsible for different frequencies,” says Uli Schwarz. This explains the limitations of conventional technology. Neither spatially selective nor cell-specific stimulation of the nerve cells is therefore possible.

“In contrast, we can bundle light and thus stimulate the auditory nerve with much greater focus. A hundred or more frequency channels are possible – so all forms of music can be enjoyed,” adds Uli Schwarz. This requires a chain of individually controllable light sources so that different sections along the cochlea can be selectively stimulated, with each section corresponding to a different pitch.

The physical advantages of optical stimulation are clear but the technical requirements are challenging. In his search for a suitable light source, Professor Moser, a renowned researcher in the physiology of the inner ear and a leading expert in optogenetics specializing in cochlear implants, came into contact with Professor Schwarz who had been conducting intense research with OSRAM Opto Semiconductors since 2001 on LEDs and laser diodes. The joint projects on thin-film technology and the miniaturization of LEDs were aimed at applications such as car headlights, TVs and miniaturized displays, however.

Building on the common technology path toward miniaturized high-power LEDs, Uli Schwarz focused on even smaller and, above all, implantable solutions.

All the available LEDs were still far too large and too rigid to be inserted in large numbers into the cochlea. Micro-LEDs had to be developed and bonded to a flexible substrate. 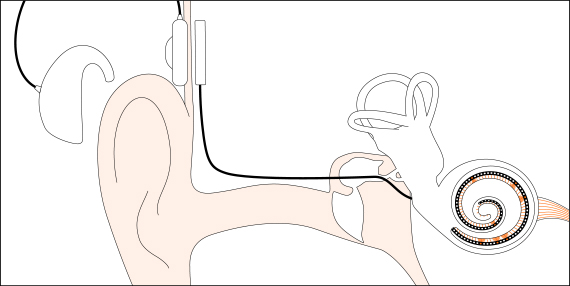 “For use in the ear, they have to be extremely small, flexible and biocompatible,” explains Schwarz. “Powered by only tiny button cells, they also need to be extremely energy-efficient. And very fast channels are needed so a person can locate sounds coming from different directions with differences in propagation times of milliseconds, for example.” This is uncharted territory in semiconductor development.

The first milestone was reached in 2014. Tiny, blue thin-film LEDs were integrated in polymers and inserted in the ears of mice.

The project has made enormous progress in both fields of research – biomedical and technological. Professor Moser was able to demonstrate light-based stimulation in the inner ear back in 2008 in Göttingen. Now his research team has shown that targeted local stimulation of nerve cells in the ear with light is also possible. High frequency resolution has been successfully combined with high temporal precision.

“We have a lot of intensive research work behind us. Now we are working on the technological challenges of the implant. The next milestone is for the implant to undergo clinical trials,” says Schwarz.

Since the implants are often inserted one year after birth, they have to function in the body over a lifetime, much like a pacemaker. The research group is therefore working on hermetically sealed encapsulation of the light sources and on reducing the number of different materials in the inner ear. Red light is being used instead of blue light because it stimulates the cells better and more gently.

To cover the enormous development costs, the research team headed by Moser and Schwarz established the OptoGenTech startup in 2019. The aim is to develop, produce and market multichannel optogenetic stimulators. “Just like we need flexible electronics, we also need flexible optoelectronics for medical components,” says Uli Schwarz. Semiconductor-based cochlear implants and therefore the vision of Moser and Schwarz could then become reality: To use light to enable the deaf and hard of hearing to enjoy music and participate in new ways in social life with all its many facets.