They are 10,000 times smaller than the diameter of a human hair. But these quantum dots will play a big role in lighting up the future.

“In research, you rarely take huge leaps,” Juanita Kurtin says. “Everyday research is a matter of persistence. We draw our motivation from the many small improvements we achieve.” But these small improvements have now produced a highly desired jump in quality: “We have introduced the first LED utilizing quantum dot technology on the marketplace.”

The boss of small things

Conducting research into small things has been Juanita Kurtin’s passion ever since she studied physical chemistry at Berkeley. After earning her degree, she dove into industrial research. She explored the properties of nanoparticles with the aim of improving the efficiency of microprocessors and solar cells: “Material research that results in the improvement of everyday items – that is exactly my thing.”

The fascination with light came six years later. Juanita Kurtin established the startup Pacific Light Technologies in Portland, Oregon. Today, she and 20 of her colleagues are part of OSRAM. As Director of Materials Research, she is constantly monitoring the properties of a new class of materials – quantum dots. Fascinated by the material properties of nanoparticles, she is exploring one question in particular: How can the unique quantum physics of the nano-scale be used to create technical innovations? Specifically: How can more and better light be produced by an LED using less energy?

With the help of a transmission electron microscope, Juanita monitors the behavior of quantum dots under the widest range of environmental test conditions. The minuscule particles are neither molecules nor extended solids. They behave like something in-between. Juanita considers them to be a really fascinating research subject: “Quantum dots are particles that we can ‘tune.’ By this, I mean that we can influence their behavior just by changing their form.” Depending on their size, the semiconductor particles consisting of a few thousand atoms emit various wavelengths of light. Larger dots produce red light, medium-sized dots green and small dots blue. The challenge is to produce extremely uniform particles in order to create the most precise light color possible.

The idea of using quantum dots directly in an LED was first explored in the mid 1990s. But in the LED, nanoparticles face tough environmental conditions – extreme heat and cold, high light intensity and interactions with environmental materials like water and oxygen. Years of research have now made it possible to protect the smallest particles in such a way that they can retain their ability to convert and emit light in an LED under extreme conditions.

And the effort is paying off. The new technology is the key to increased energy efficiency and excellent color rendering of LEDs. Because light, which is converted by a quantum dot, not only changes its color, it also becomes more brilliant.

Only miniscule is small enough

Today, quantum dots are being used in a wide range of ways, including as fluorescent materials, in displays and as security features on banknotes. “We are the first and, up to now, the only company to use this technology in a marketable manner for LEDs,” Juanita says. “Currently, it is being used for general lighting where there was the greatest need for narrow red emitters. But we are just getting started. As a rule, quantum dots are an interesting solution for all photonics applications where narrow-band light is required.” Things really get interesting with μLEDs, microscopically small LEDs. The strengths of quantum dots really shine here. Quantum dots are some of the few materials small enough to be used on μLEDs as converters, while still producing brilliant colors. For this reason alone, Juanita is certain of one thing: In the future, the small particles will end up being the big guys in lighting. 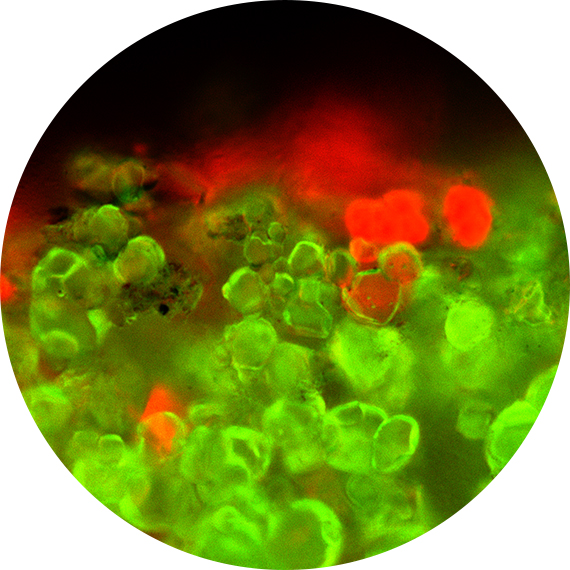