Plants essentially need water and light in order to grow. By using light emitting diodes (LEDs) with different wavelengths, commercial growers are now able to control each individual stage of plant growth. With a wavelength of 660 nanometers (nm) the prototype of the Oslon Square Hyper Red, for example, can control the growth of blossom. Together with the deep blue (450 nm) and far red (730 nm) versions, the Oslon family from Osram Opto Semiconductors perfectly covers the entire spectrum of plant growth.

The prototype of the high-power LED has an integrated 2 mm x 2 mm chip which provides improved performance. By using the latest technologies, developers have been able to achieve a typical radiant power of 905 milliwatts (mW) with radiant efficacy of 60 percent, at a current of 700 mA and an operating temperature of 25 °C. This represents a significant improvement of 13 percent in terms of radiant power and 25 percent better radiant efficacy compared with the current Oslon SSL. The beam angle of the Oslon Square Hyper Red is 120°.

The Oslon Square Hyper Red has the same footprint as the existing Oslon SSL versions so it can be easily used as a replacement. Switching to the new product makes economic sense for customers in two respects. First, the new high-power LED is more powerful than its predecessor, and second, one Oslon Square Hyper Red will replace two Oslon SSL LEDs. Volume production of the LEDs is scheduled for the end of 2017. 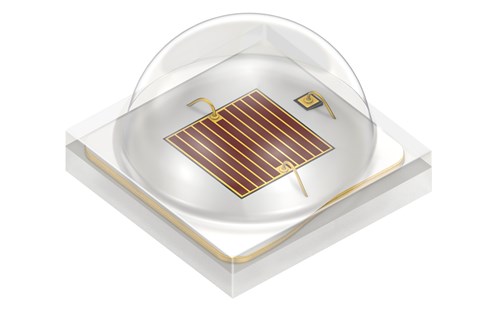