The ams CMV20000 and CMV4000 CMOS image sensors are part of NASA’s Mars 2020 Perseverance rover and meet and perform in the demanding conditions on Mars making them also perfect for the most demanding industrial applications on Earth.

When do you think the first human will set foot on Mars? Probably this still lies some years ahead, but we are getting closer. This panorama of the red planet, taken on February 20, 2021, by the navigation cameras, was stitched together from six individual images after transmission home. Of the 23 cameras in use on Perseverance, ten include vital CMOS (Complementary Metal-Oxide Semiconductor) image sensor technology from ams, based on the ams CMV CMOS image sensor family which is used in many demanding industrial applications at home here on Earth. The use of the highly robust ams CMOS image sensors in the NASA Perseverance rover demonstrates the excellence of their global shutter pixels, the high shutter efficiency and high dynamic range to enable exemplary image quality.

Mars 2020 uses a new generation of engineering cameras that give much more detailed information—in color— about the terrain around the rover. They measure the ground around the rover for safe driving, check out the status of hardware, and support sample-gathering. Some help determine the best way to move closer to scientific targets.
Nine CMV20000 image sensors are used in cameras designed for surface operations: navigation cameras (Navcams), hazard avoidance cameras (Hazcams), plus one Cachecam. Two Navcams, mounted on a pan/tilt mast, acquire color stereo images of the surface. Six Hazcams, fixed-mounted to the rover body, acquire color stereo images of the surface. The Cachecam, a new camera type, acquires images of Martian material inside the sample tubes during caching operations.

The SuperCam on the Perseverance rover examines rocks and soils with a camera, laser, and spectrometers to seek organic compounds that could be related to past life on Mars. It can identify the chemical and mineral makeup of targets as small as a pencil point from over seven meters (20 feet). NASA says this is a great advance on previous capabilities. In fact, it considers SuperCam to be a superhero for making discoveries on Mars. NASA describes SuperCam as having: “super vision, and its spectrometers have super senses for identifying the chemical makeup of Martian rocks and ‘soil’ (regolith). SuperCam can see across great distances to measure targets not reachable by the Perseverance rover's other tools. It's an improved version of the ChemCam laser on Mars rover Curiosity: SuperCam can additionally analyze minerals and molecules and take color instead of only black-and-white pictures.”

About the ams technology inside: In addition to exploring Mars, the ams CMV family of CMOS image sensors are used in many industrial scenarios. The CMV20000 is a high sensitivity pipelined global shutter CMOS image sensor with a resolution of 5120 x 3840 pixels. Pipelining means that exposure during read out is possible. The state-of-the-art pixel design makes true correlated double sampling (CDS) possible which reduces the fixed pattern noise and dark noise significantly. The imager integrates 16 LVDS channels each running at 480Mbps resulting in a 30fps frame rate at full resolution (12 bits per pixel). Driving and read-out programming can be set over a serial peripheral interface. An internal timing generator produces the signals needed for read-out and exposure of the image sensor while external exposure triggering remains possible. The CMV20000 is derived from a custom CMOS image sensor. Learn more about the CMV20000 and the CMV4000. 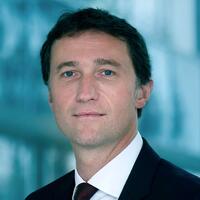 Pierre Laboisse is the EVP of Global Sales and Marketing for ams. With a deep expertise in technology, Pierre is passionate about how ams employees create technology that enables a better lifestyle for all.