Quantum computers would be revolutionary. Ion traps are a promising approach. But how can you calculate with trapped ions? And what role does light play in all this?

Zero and one at the same time

Computers of the future will recognize more states than just zero and one. They will recognize both at the same time. That is something that is completely at odds with how we experience the world around us, but quantum computers operate in a world beyond classical physics.

If there are many different ways of solving a particular problem, a classic computer will have to tackle them one after the other. Not so for a quantum computer. “It performs calculations in parallel. This is a huge advantage in cases where black and white analysis is not an option,” says Hubert Halbritter, Development Engineer for New Chip Technologies at the ams-OSRAM Group. “Such cases include complex problems involving time components, such as logistics processes, weather forecasts, multifaceted production processes and, most importantly, encryption algorithms.”

Although the principles of quantum mechanics have been known since the 1920s and everyday applications such as cell phones and modern medical diagnostics are based on those principles, the development of quantum computers is still a distant dream. “Without quantum physics, no LED or semiconductor laser would work,” adds Halbritter. “But now it’s all about second-generation quantum technology. It’s about developing a computer that can not only solve specific tasks millions of times faster than a conventional computer but, more importantly, compute things that were previously unthinkable.” 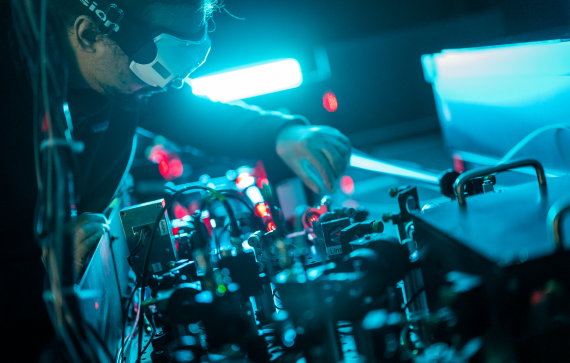 That is why all around the world companies such as Google and Microsoft as well as numerous universities are conducting research into quantum computing. And Europe is no exception. After all, sovereignty over this technology, which will form the basis for secure information transmission and artificial intelligence, is not something that should be left up to others. The Technical University of Braunschweig, for example, is pooling the expertise of more than 400 scientists in the Quantum Valley Lower Saxony research consortium (QVLS). Long-standing research partners such as OSRAM Opto Semiconductors are part of the team to provide a link between theoretical research and practical applications.

There are several paths – or perhaps marathon courses would be a better description – that can lead to the finishing line. One of these involves confining atoms in what are known as ion traps. In this method, lasers and precision optics are used to trap individual charged atoms, in other words ions, in vacuum chambers. Each of these ions is a qubit, a computable quantum bit. They are loaded with information by means of precise laser pulses and brought into a defined state. For qubits to know what they are supposed to calculate, commands are transferred to the ion qubits in different stages using targeted laser pulses. In this way, two or more ions can be prepared in the trap so they form interconnected or “entangled” quantum bits. These enable basic quantum IT operations to be performed.

“It’s a bit like using a laser pointer to hit a human hair hundreds of meters away.”

This approach has a significant advantage over other technologies. “Laser-controlled ion traps are the only technology that can produce quantum states at room temperature. With all the other technologies you need extremely low temperatures, way lower than anything we encounter in our everyday lives,” says Halbritter. What’s more, ion trap-based approaches have the lowest error rates to date, are scalable and can be miniaturized. These are important features that for the first time open up the prospect of everyday applications.

Precise control of the quantum states is crucial for error-free computing. “We need accurate, compact lasers so we can target the ions with a high level of precision. Laser diodes, optics and beam guidance systems have to be combined in an extremely small space in order to hit the ions accurately. That’s the challenge for my team,” adds Halbritter. “It’s a bit like using a laser pointer to hit a human hair hundreds of meters away. This requires an extremely precise wavelength and a very steady hand,” says Halbritter.

We already know that an ion trap-based quantum computer will work in principle but there are many technological questions that are still unanswered. At present, the laser wavelength cannot be stabilized or controlled with the accuracy needed for ion traps, nor can parallel lasers be set up with the necessary precision in the tiniest of spaces.

The marathon runners are only just warming up in the race for the quantum computer. It is still unclear as to which technology will win. What is clear, however, is that there is much to learn and much to gain along the way. In terms of miniaturization, OSRAM Opto Semiconductors is continuing its long-standing research work – because space is a scarce commodity not only in quantum computing. Although the photonic components needed for a quantum computer are highly specialized, they can also be used for other applications. “In our quest to create a quantum computer, we are making technological advances that we can use for other applications. Sensors, LEDs and optics must be miniaturized and packed together in the tiniest of spaces. This is urgently anticipated for markets that are important today or will be in the near future, such as augmented reality, display technologies and ambient sensors,” says Halbritter.

When will the quantum computer become a reality – in five, ten or 15 years? Experts are not keen on making any predictions. Right now, research is being conducted at the very limits of what is feasible. “We are laying down the foundations for the future. We have the opportunity to shape these foundations and to exploit the advantages of optical technologies in this race,” adds Halbritter.

From a historical perspective, optoelectronics is at the equivalent stage of electronics at the end of the 1950s before the advent of the first integrated circuit. Up to now, LEDs, lasers and photodiodes have been available as individual components, not in combination as “photonic integrated circuits” (PICs). This next level of innovation would set rapid technological advances in motion and, above all, enable cloud computing to be much more energy-efficient – even before quantum computers come on the scene.

But the best advice for this marathon journey comes not from the quantum physicist Einstein but from the poet Saadi: “Have patience. All things are difficult before they become easy.”