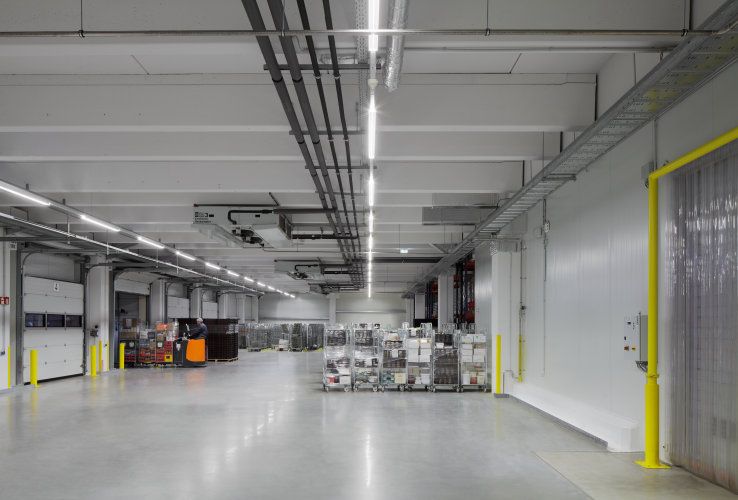 Osram Lighting Solutions has drawn up a cross-location LED lighting concept for Havi Logistics. The basis for this was pan-European energy audits previously carried out by Osram in the European distribution centers of Havi Logistics. Following lighting refurbishment, up to 80% in energy costs are now being saved thanks to efficient LED technology and intelligent light management in the cold storage centers.

Energy audits as the basis for lighting refurbishment

The international logistics company Havi Logistics is active in over 30 countries in Europe, supplying leading restaurant chains in the system catering sector from over 60 distribution centers (DCs). A five-year sustainability initiative specified that all locations should be upgraded to a uniform, energy-efficient lighting concept. "It's our aim to cut energy costs by using modern LED technology and integrating intelligent light management. We also want to reduce the level of heat input in the cold and deep-freeze stores caused by conventional lighting," informed Michael Buß, Head of Technology at Havi Logistics.

Osram Lighting Solutions (LS) carried out pan-European energy audits to analyse the locations with regard to lighting technology and energy. Osram used its so-called data logger at all German locations for precisely determining the savings potential, which documented the occupation frequency of various areas and levels of daylight and artificial light over the course of two weeks. The savings potential identified was between 20% and 80% according to the specific area. "In this way a lighting concept could be drawn up for the various building or warehouse areas, and based on that the energy savings potential as well as investment costs and payback periods could be precisely determined according to the particular location," explained Christian Oswald, Project Manager at Osram.

LED refurbishment at the Neu-Wulmstorf location

Projects for upgrading to LED technology have recently been carried out at several logistics centers in Spain, Portugal, Poland, Sweden and Germany. For example at the Lower Saxony location of Neu-Wulmstorf, one of the largest DCs of Havi Logistics with floor space of 14,000m². Two different LED luminaires are used according to the building or warehouse area at the location, connected to a light management system.

Around 50 Siteco NJ 700 LED highbay luminaires create a future-safe and robust lighting solution for the high warehouses and aisles between freezers that have extremely cold ambient temperatures of around -23°C. The luminaires in the freezer area are equipped with individual sensors from the "Step Control" functional package. If people or vehicles are registered in the sensor detection range, lighting is switched to 10% general illuminance and 100% work illuminance levels. If no people or vehicles are detected, the luminaires dim again to 10% general illuminance after a 30-second delay period. Installation itself is partly very simple thanks to 1:1 replacement of the obsolete luminaires, and supplementary wiring for the light control is not required.

The lighting concept also includes around 300 Siteco Modario LED luminaires used for lighting aisles in the dry storage facility for example. Sensor modules were integrated into the Modario trunking rails to control the aisle lighting in sections according to movement and levels of daylight, with three sensors being integrated in each aisle.

Delay periods can be reduced to a minimum thanks to the very high detection quality of sensors used in the freezer and dry storage areas. This is an essential factor for achieving energy-efficient lighting because modification from work lighting (100% dim setting) to general lighting (10% dim setting) is correspondingly quick.

Replacing the obsolete T8 fluorescent lamps and HID (high pressure gas discharge) lamps of the old lighting installation with an innovative LED solution now provides enormous savings in energy and carbon dioxide levels. The input of heat in the cold store areas has also been cut thanks to the new LED lighting concept, enabling further energy to be saved in these areas that go up to make a major part of a distribution center.

Havi Logistics now saves around 1.7 MWh of energy and over 830 tons of carbon dioxide annually in Germany, and the return on investment should be paid back within approximately 2.8 years. Michael Buß and his team are appropriately impressed with the results. "Energy savings thanks to the lighting system are up to 80% according to the specific warehouse area, and are even 90% in some areas. The levels of lighting and light quality were also distinctly improved, and workers noticed a significant improvement in their work surroundings after the lighting refurbishment so that general levels of satisfaction increased."