Ever more towns, cities and local councils are upgrading their road lighting to LED, thereby significantly cutting power overheads. Milan and Turin for example are expecting at least 50 percent less electricity consumption thanks to recent transformations to LED and Optotronic control devices from Osram. However, lightning strikes can endanger the complete exploitation of such economic advantages. As LED modules are run with lower voltage levels they may be damaged from overvoltage, and this danger has increased in past years – the UN Climate Council has identified increasing levels of lightning worldwide in its fifth assessment report (IPCC14). Around 10 percent of the several million lightning strikes occurring each day impact on the ground, thereby causing voltage peaks. To effectively protect LED modules assembled in road luminaires, the Osram Optotronic 4DIM features overvoltage protection of 8 kilovolts as standard. 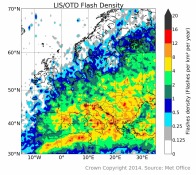 Lightning density in Europe differs significantly from region to region. Italy and the coastal areas of the Balkan countries are especially affected, and in Germany the South West.1
Mandatory image source specification:© British Crown copyright 2015, the Met Office

Levels of lightning density in Europe are high in summer, particularly in July and August, and with large regional differences – the U.K. Meteorological Office recorded between just 0.25 and over 20 strikes per square kilometre in the year 2014. In general it can also be said about distribution across Europe that lightning in the South East occurs more frequently than in the North or North West, and in towns and cities more than in rural areas. Lightning in Germany mainly occurs in the South West. In general, the probability of heavy lightning storms across Germany has significantly increased in past decades, as identified in 2013 by climatologists from the Karlsruhe Institute for Technology.

As a consequence, the new generation of “Optotronic 4DIM” electronic control units from Osram features protection of up to 8 kilovolts between mains supply and ground in protection classes I and II. This means that lightning can impact to proximities of up to 200 metres from a luminaire mast without the LED module being damaged.

Compared to the common 4 kilovolt overvoltage protection with control units of other manufacturers this means that with e.g. mast spacing of 30 metres, twice the quantity of road luminaires survive lightning impacts without damage. In many regions in Europe the high level of overvoltage protection with Optotronic 4DIM units is therefore usually sufficient to protect municipal investments in the long run from such occurrences. In regions with high lightning density levels though, it is recommended as a precaution to implement supplementary protective measures, for example in the main distribution frames and junction boxes of road lighting systems.

Osram as the first manufacturer made this 8 kilovolt protection possible with a so-called EQUI connection (equipotential) for protection class II applications, enabling various components of the lighting system to exhibit the same electric potential, thus significantly reducing the occurrence of overvoltage on the LED module.

Optotronic control units also reliably protect from voltage peaks from two other hazardous sources – from those with up to 6 kilovolts due to load changes or switching commands in the power supply grid often generated several dozens of times per year, and from electrostatic discharge occurring with e.g. maintenance work if no ESD protective measures exist.

Overvoltage though does not automatically mean the immediate failure of an LED module, but causes at least premature ageing and therefore shorter operating durations, this having consequences for the operator in terms of costs. In normal cases LED solutions have low failure rates and achieve up to 100,000 operating hours.

1If you want to use the graphic about the lightning density in high resolution for editorial purposes please contact press@osram.com.

This document contains statements and information pertaining to our future business and financial performance and future developments that may constitute forward-looking statements – i.e. statements about processes that take place in the future, not in the past. These statements pertaining to the future can be identified by expressions such as "anticipate", "expect", "want", "intend", "plan", "believe", "aspire", "estimate", "will”, "predict" or words of similar meaning. Such statements are based on current expectations and certain assumptions of OSRAM‟s management. They are, therefore, subject to certain risks and uncertainties. A variety of factors, many of which are beyond OSRAM‟s control, affect OSRAM‟s operations, performance, business strategy and results and could cause the actual results, performance or achievements of OSRAM to be material different from any future results, performance or achievements that may be expressed or implied by such forward-looking statements or anticipated on the basis of historic trends. These factors include in particular, but are not limited to the matters described in the chapter “Report on Risks and Opportunities” in the Annual Report of OSRAM Licht Group. Should one or more of these risks or uncertainties materialize, or should underlying assumptions prove incorrect, actual results, performance or achievements of OSRAM may vary materially from those described in the relevant forward-looking statement as being expected, anticipated, intended, planned, believed, sought, estimated or projected. OSRAM neither intends, nor assumes any obligation, to update or revise these forward-looking statements in light of developments which differ from those anticipated. Due to rounding, numbers presented throughout this and other documents may not add up precisely to the totals provided and percentages may not precisely reflect the absolute figures they reference.