Dynamic in-car lighting scenarios thanks to smart LED from Osram 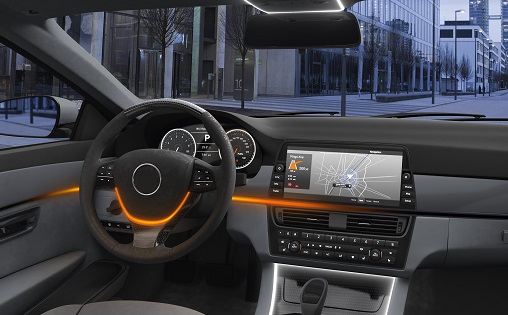 The more autonomous a car becomes, the more the way in which it is used will change. As developments continue toward autonomous driving, more and more attention is being focused on the passenger cell. Light will become an integral part of the passenger cell, taking on functional and design-specific tasks. Previously static light, which could only be switched on and off, has now been given a dynamic dimension with the prototype of the Osire E4633i – with countless design options for car manufacturer.

“In the future, the interior of vehicles will be more than simply a cabin for the driver and passengers. It will be an extension of our living space in which we will be able to work and relax”, explained Stephan Pawlik, Marketing Manager Automotive Interior at Osram Opto Semiconductors: “Light sources in car interiors will provide ambient lighting and perform a number of additional functions. For example, they could use dynamic and color effects to draw the driver’s attention back to the traffic in good time.”

To make it easier to provide such new functions in vehicles, Osram has installed a serial control driver from Inova Semiconductors in the new E4633i product from the Osire family in addition to the three color chips (red, blue and green). In the lighting solution it is now possible for a large number of separate LEDs to be controlled via a serial bus system either individually or in groups. This provides simple implementation of uniform color rendering across the entire color space as well as dynamic light cases. Control of the desired color and brightness has been simplified because the E4633i is precalibrated and can automatically correct color shifts in the red range caused by fluctuations in temperature. The LED has an extremely compact pre-mold SMT package with a footprint of 4.6 mm x 3.3 mm x 0.7 mm. The compact package and the link to the serial bus now allow implementations with more LEDs in a much smaller space.

Since September 2018, Osram Opto Semiconductors is a member of the Iseled Alliance (Integrated Serial/Smart Embedded Light Emitting Diode) and will drive development forward in this field. The prototype of the Osire E4633i will be presented for the first time at electronica 2018 at the Osram booth (booth 155) in Hall B4. The trade fair will take place from November 13 to 16 in Munich.