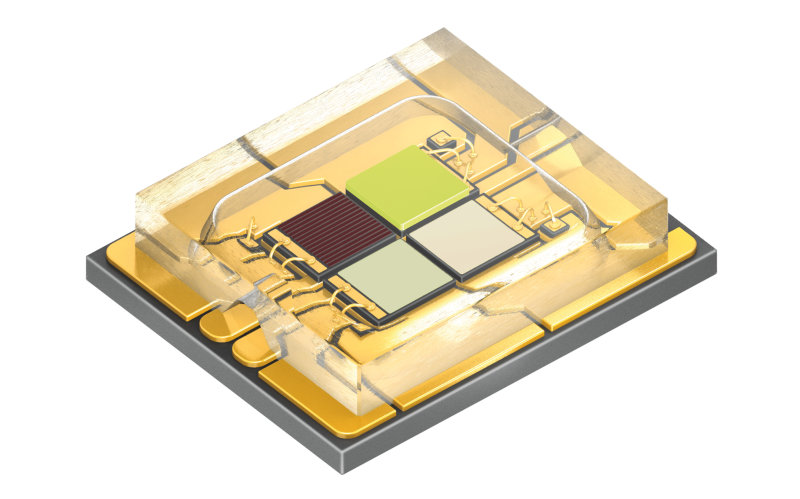 Multichip LEDs for use in stage spotlights

Osram Opto Semiconductors has expanded the product portfolio of its Osram Ostar Stage family. The four chips of the new high-power LED in red, green, blue and white can be operated at up to 2.5 ampere (DC) thanks to improved chip technologies. This leads to twice the output of 30 watts (electric) from the same chip and package area compared to the existing version, adding another output class to the product family. The new LEDs were developed primarily for use in stage spotlights.

Four high-power chips with the latest thinfilm and UX:3 technology in red, green, blue and white are the basis of the improved brightness of the new Osram Ostar Stage. The 1 mm² chips can be operated for the first time at up to 2.5 ampere (A) providing an output of 30 watts (W), which is twice as high as the existing version. The Osram Ostar Stage versions now cover outputs between 15 and 60 watts. “The higher current which is necessary for a higher output requires the thermal management of the Osram Ostar Stage to be adapted so that the heat generated in the chip can be removed as effectively as possible”, said Wolfgang Schnabel, Product Marketing LED Industry at Osram Opto Semiconductors.

More flexibility with a number of identical parameters

“At the same time many features such as the package size and beam characteristics match the ones from previous versions. That way customers can stick to their existing optics, and the overall design of their lighting solutions”, added Schnabel. The new Osram Ostar Stage gives customers more flexibility for their stage spotlight product portfolio. Spotlights with the same number of LEDs will be even more powerful, and spotlights with fewer light emitting diodes will have the same brightness.

Apart from stage lighting, the new Osram Ostar Stage LEDs are ideal for use in mood and architectural lighting; in the latter case, they are the preferred light source for effect and accent lighting. The high-power LEDs are available from Q1/2016 in high volumes.